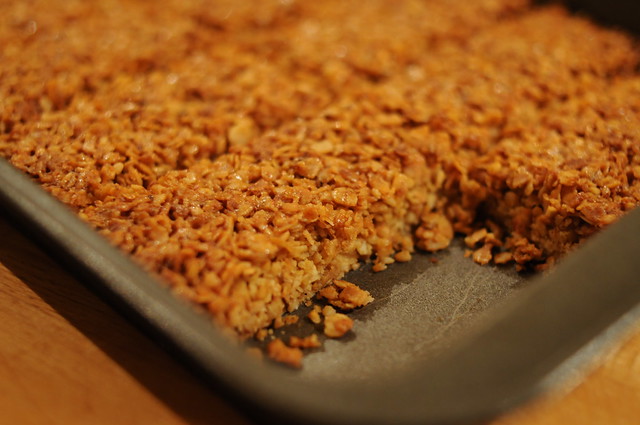 Granola bars can be fun and baked oatmeal may be a nutritious breakfast, but when it comes to baked-oat treats my alliances lie firmly with the flapjack. Don’t confuse these with American pancakes. Flapjacks are a British treat commonly eaten with tea. At its most simple, the flapjack is a bar cookie made with oats, golden syrup, butter and sugar. But who wants to stop there? You can find them topped with chocolate, with a yoghurt coating, with dried fruit thrown in, with a caramel drizzle and with coconut or chopped nuts. No matter what variation you choose, the end product evokes childhood memories, even if your mother never tucked one into your lunch box.

While a flapjack would be a winter or fall treat in America, England’s constant drizzly grey means the buttery oat bar is a welcome snack all year long. This dense, stick-to-your-bones, bar would feel out of place on a stifling August day in Arizona. But the flapjack’s utter British-ness isn’t limited to the weather. The tendency to fall apart would be incongruous in clean, minimalist New York cafes. It’s amusing to think of the humble, high-energy treat marching into the sweet Italian merenda or the delicate French goûter. Yet, when enjoyed with a cup of tea, a few hours after the cheddar and red onion sandwich you had for lunch, the flapjack feels completely appropriate.

Although every high street café offers a flapjack (or three), this abundance contradicts the essence of flapjack. The tray bake loses its endearing crumbly bits when pre-cut into machine perfect slices. Rather than exercising self-control as the tray cools and hardens once out of the oven — and the subsequent restraint when cutting them into suitably small squares — the café flapjack encourages indulgence. It misguides you into feeling healthy for not choosing the carrot cake with 3 cm of cream cheese frosting, but it’s frosted with chocolate ganache to prevent disappointment. Arriving in the café, the flapjack transforms itself and your interaction with it.

At home kitchen you make your flapjacks as you see fit. You decide if you want them chewy or crunchy. You can make them dense or loose. The same goes for dried fruits: do you add raisins, sultanas, apricots or shun the addition of extra-sweetness? Those looking for an ‘all-natural’ variation can use honey instead of golden syrup, while those baking their childhood can reminisce over Lyle’s classic tin. As opposed to similarly home-y treats — like a chocolate chip cookie, say, or a muffin — the home cook can easily adapt the flapjack without needing a different recipe. Making flapjacks requires following an intuitive formula rather than a prescriptive recipe, marking each variation with the person who made it, the time when it was made and the place where it was enjoyed.

I couldn’t tell you when I first ate a flapjack and I assume the same goes for most people. All the components are familiar enough that the combination of them inevitably evokes nostalgia. The oats are the porridge of your childhood. The butter is what you had on toast, the sweetener what you got drizzled on top of either. No matter what you top it with, the individual components make sure that the flapjack will never become a trendy treat. Toffee? That’s those toffee apples from childhood fairs. Chocolate? Every Brit’s favorite treat. Yoghurt? It’s an icing-like sweetness. Even plain the flapjack’s restraint is impossibly British.

While variations of these memories exist abroad, it seems that there are few countries in which they play as vivid a part in the national character as in Britain. Where else does the grocery store carry ten different types of porridge oats? Is there another country as devoted to milk chocolate, toffee and stiff icing? The flapjack is memory from its craggy edges and simple process to its comforting taste and thousands of variations.