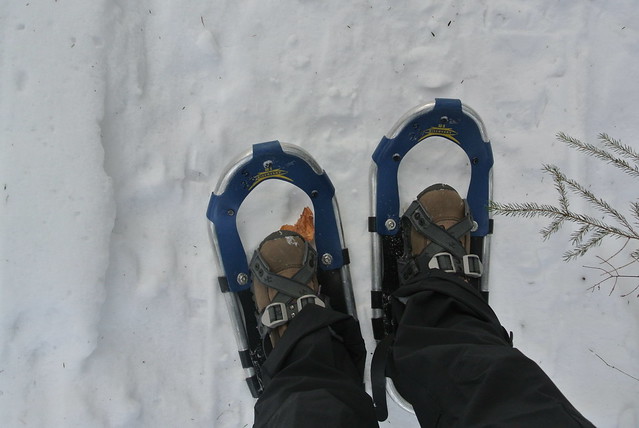 Go snowshoeing! All you need is a pair of shoes and the ability to walk!! This appeal reverberates throughout snowshoe literature, but — in my experience — a successful expedition requires more. You’ll need warm clothes and, if you’re the whinging sort, waterproof pants. You’ll want insulated gloves, a backpack, some water and trail mix, not to mention a pack of disposable hand warmers. Although snowshoeing may have once been a question of strapping on flotation-friendly shoes and walking across deep drifts, modern sensibilities have complicated the sport, evidencing a shift in how contemporary society moves.

Neither heroic age explorers nor intrepid mountaineers sparked my snowshoeing mania. Nancy Drew launched my desire to crunch over the white stuff. I was twelve, playing White Wolf of Icicle Creek. I sent the game gratuitously crunch-crunching over simulated snow in my artificial shoes. Even though snowshoeing starred in my winter reveries for years before I strapped actual metal frames onto my real-life boots, those dreams opened me to the sport’s unique pace and beauty.

As ice skating began as a way to converse energy in frigid Northern Europe, snowshoeing sprung out of necessity. Snowshoes helped those living in cold regions reduce the effort needed to cross areas blanketed in snow. Unfortunately, since early snowshoes were composed of wood, clues to the shoes’ origins have dissolved along with the snow they traversed. We may be momentarily sated by British archaeologist, Jacqui Wood’s assertion that Ötzi, a remarkably preserved corpse found near Bolzano in Northern Italy, died wearing his snowshoes. In the absence of a distinct origin, the modern snowshoe-r may freely transpose their understanding of the sport onto its history.

Despite the uncertain provenance, researchers have charted the snowshoe’s development in relation to the terrain in which the shoes were found. Given the distinct appearances of snowshoes in North America and Europe, nomadic Central Asian tribes are thought to have invented the shoe, taking their gear with them as they dispersed. Thus, the unique snowshoes in Northern Europe, Canada and Eastern United States arose from a common ancestor. The variations we see were subsequent adaptations to suit each terrain’s unique challenges. In the North Eastern United States, Native Americans favoured Bear Paw shoes. These shoes were wide and circular, perfect for manoeuvring in densely wooded areas. Maine Native Americans preferred a longer style, aptly called the Maine snowshoe, that allowed the user to move quickly across large expanses. Within each region, various shoes would be interchanged throughout the season, depending on the specific snow conditions. Although the snowshoe’s origins are up for debate, the relationship between the snowshoe’s local use and environment marked, and continues to mark, the shoe’s development. 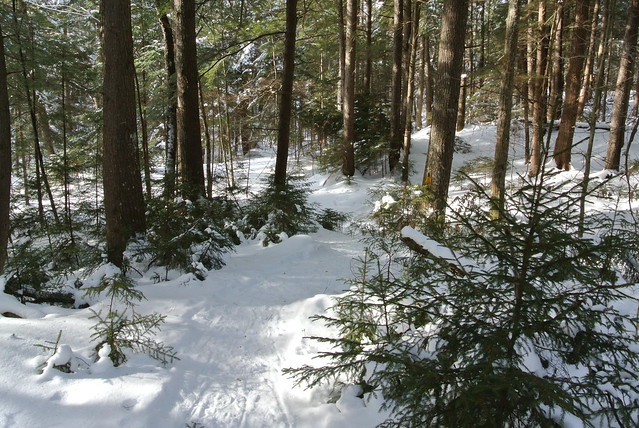 Modern snowshoes seem the natural progression in snowshoe’s evolution, responding to today’s multi-purpose manner of sport as previous models responded to topographic particularities. Gone are the regionally specific, artfully woven foot beds. Today we enjoy zippy aluminium frames with waterproof neoprene foot beds and tough steel crampons. A standard pair of snowshoes can transition from backcountry terrain to rolling hills, reflecting the varied approach the modern sportsperson craves. We aren’t static in our practice; we move between regions, shifting landscapes and lengthening our hikes. Although certain subcultures cry the superiority of the traditional snowshoe, these old models are better at generating romantic fantasy than navigating trails. The contemporary snowshoe’s ability to shift between various terrains and purposes reflects spontaneous modern movement as the North Eastern Bear Paw or Maine-style shoe once mirrored local culture.

None of this was on my mind as I set out on that first nerve-fuelled snowshoe hike. After driving the six-hours from Brooklyn’s cement-grey to the Adirondacks’ snow dusted peaks, my legs itched to escape into the enticingly unblemished powder. But what was once routine for the region’s Iroquois population was, for me, an endeavour.[1] Shivering in the mountain chill, I hurried into my sweater, zipped up my vest, yanked on my socks and laced up my boots. With ceremonial pomp, I threw my backpack over my down-coated shoulders. Now came the rite of the first snowshoe fastening. Although these preparations might seem hopelessly modern — as distant from the Iroquois’ daily snowshoe jaunt as my subway commute — the process helped my speedy twenty-first century mind relate to the simple pastime.

If elaborate skis exemplify complicated contemporary winter sports, snowshoes are the no-frills throwback. Forget the instructor strapping on your skis, your own trembling hands can put on snowshoes. And forget skis punishing your curiosity as you stand up; snowshoes won’t slide in separate directions like wooden sticks will. I stood up, took a tentative first step, and felt the tight grip I had against the snow. One step became two and five the snowshoe’s steel crampons continued to support me. The shoe’s back remained loose like a flip-flop.[2] When I reached a slightly slick surface, the metal grips protected me from plummeting down. No matter your hiking style, there’s a snowshoe to support you. There are light shoes for running; mid-sized shoes for hiking on groomed trails; and large shoes for venturing into the backcountry. But I didn’t worry about the best shoe. I just fastened my rental shoes, handed to me without mention of a size, and began to stomp atop the snow.

Forget wobbling around on ice skates for years, snowshoeing is an instant gratification sport. But even instant gratification necessitates a revised outlook. For the flat hike, snowshoeing requires adapting your gait for a wider-than-normal base and adjusting your expectation from a brisk walk to a contented clomp. You walk and you wander and, if you arrive at a hill — steep or shallow — you pause momentarily taken aback by the incline. Look down at your feet and appreciate the ample base grounding you. Approach the incline at a slight angle then walk. Aha! The metal grabs earth and you enjoy a solidity no normal shoe could possess. Adjust your posture, maybe move forward a bit to prevent yourself from tumbling back. Poles might be helpful, but they aren’t necessary. Because, with a little focus, you’ll realise you’ve conquered your mini summit and are ambling to the pleasant rhythm of snowshoes thwacking against icy trails.

Like anything that excites people, snowshoe literature presents manifold techniques and competitions for zealous athletes. Magazines articles describe the fervid sub cultures that only snowshoe using traditional wooden shoes, the kind that decorate every serious lodge’s fireplace. Blogs profile the athletes petitioning to earn Olympic recognition for the sport. But you can abandon your competitive streak at the lodge, along with the ornamental snowshoeing gear. Meandering through the pristine terrain means wandering away from the present. Spotless trails offer a glimpse into what snow would look like if cars and foot traffic didn’t blacken it immediately. Routine concerns dissolve; just navigate from point A to point B without becoming a galumphing wet mess. Only now, if you do slip into soppy misery, there’s a warm room and a cup of hot cocoa waiting for you. 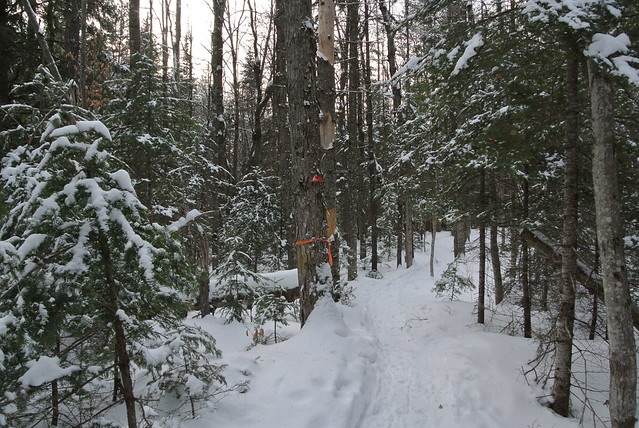 Whereas the production of superlative snowshoes was once an art, the modern preoccupation seems to concern techniques for a first-class expedition. This discussion displaced the location of art in snowshoeing. Before the industrialisation of snowshoe production, snowshoe making was a prized craft and way to interact with spiritual forces, in addition to being an essential survival skill. Although some traditional snowshoe craftspeople still exist, large companies manufacture the majority of footwear traversing the trails. We can personalise our hike by selecting from among a rainbow of colours and different frames. This consumerism bears no resemblance to art. But a peaceful walk through the wood does. When the discussion of gait and proper shoe disappear, we’re left with the same terrain the snowshoe-ers of yesteryear crossed. We may experience the journey differently — following packed trails bears little resemblance to marking freshly fallen powder — but the basic elements remain. As Native Americans remained mobile through harsh winters, so can our identities shift on a snowshoe expedition.

The trail’s peaceful atmosphere and clean landscape immediately enveloped me, but it was the calming rhythm of walking through snow that seduced me. Is this how Native Americans felt as they traipsed to their destination? What was it like when populations required snowshoes? These thoughts danced into my mind, then fluttered out as I admired a small, snow cloaked tree or listened to the sound of water running under a frozen over lake. Sometimes a song would pop into my head, disappearing when I arrived at the more absorbing rhythm of water flowing under a frozen stream. The sun filtered down through the trees, illuminating the snow with a gentle glimmer. A frigid winter breeze occasionally whipped through, but the consistent movement promptly warmed you. I imagine Native Americans felt similarly.

Snowshoeing shouldn’t be considered a niche sport: it is everywhere. It allows you to encounter the past and engage with your present. It can be a serious, Olympic-minded endeavour or a fun afternoon activity. It helped shape continents and cultures. Snowshoeing is modern and antiquated, and all the more exciting because it exists within this tension.

[1] It should be noted that neither the Iroquois nor the Algonquin, the Native American tries settled in New York, settled in the region. Instead, the used the mountains for warfare.

[2] This is not true of all snowshoes. Some strap to the rear of your foot as well, reducing the snow spray with each step, making it less likely you’ll need gaiters to keep snow out of your boots.