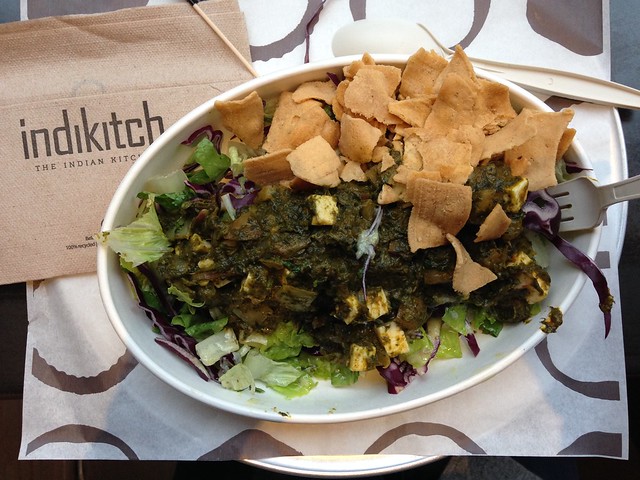 Pep, spice, and zing together in a handy container: curry powder is the Western cook’s shortcut to bold Indian flavour. But there’s more hiding in the little jar than just turmeric and ginger. Although curry powder imparts an Indian aura onto ingredients, the spice blend is a recent Western invention born from the home cook’s desire to add a dash of exotic to an otherwise routine dinner. Curry powder shouldn’t be regarded as a relic of colonialism. Cultural adaption has integrated curry powder into Western culinary tradition, allowing chefs and eaters to appropriate the ‘other’ through a nation’s widely recognized dishes and emblematic ingredients.

Curry powder is a pre-packaged blend of spices, leaning heavily on turmeric for colour, cumin for flavour, and dried chillies for heat. Since the introduction of the first British-produced curry mix in 1780, manufacturers have added and subtracted spices for a profile that suits their nation’s current cultural taste and goes well with the most popular dishes. While the mix should taste noticeably ‘Indian’, throwing some seasonings into a jar and labelling them curry powder is a distinctly Western habit, absent in India and other curry consuming countries. Whereas an English recipes call for varying amounts of curry powder to make Butter Chicken and beef curry, Indian recipes list the specific spices required to flavour a specific dish. When an Indian cook reaches for a spice blend, they’re likely grabbing garam masala: a combination of peppercorns, mace, cinnamon, cloves, cardamom, nutmeg and other spices.

In the same way that the notion of curry powder is uniquely Western, ‘curry’ as a term for a soupy, stew-y main is absent in India’s culinary lexicon. Curry is likely an Anglicism of kari, a southern Indian Tamil word indicating a spiced sauce for meats or vegetables (and, possibly, spice tree).[1] Evidence suggests that dishes resembling the modern curry have been cooked in region surrounding modern India for approximately 4,000 years, making curry one of the longest continually prepared dishes.

Curry’s European history is shorter, but not without its mysteries. Portuguese traders may have brought the dish from their colonies in Indian to Europe during the 17th century. Others argue that curry was an English invention, dating to the 1747 when Hannah Glasse included a recipe for a rabbit or fowl stew with coriander and black pepper in The Art of Cookery (later editions included ginger and turmeric as well). The term has existed in English since 1390 when Richard II commissioned The Forme of Curey, with ‘curey’ coming from French cuire, to cook, and referencing a stew-like dish. In a 16th century account of a trip to India, a Dutchman describes a sauce-y fish recipe as a carriel. Given the dish’s varied origins it makes sense to examine curry as a Western dish largely independent of Indian tradition. This perspective removes the tricky notion of authenticity, allowing each curry-infused dish to exemplify a European way of interacting with foreign cuisine. 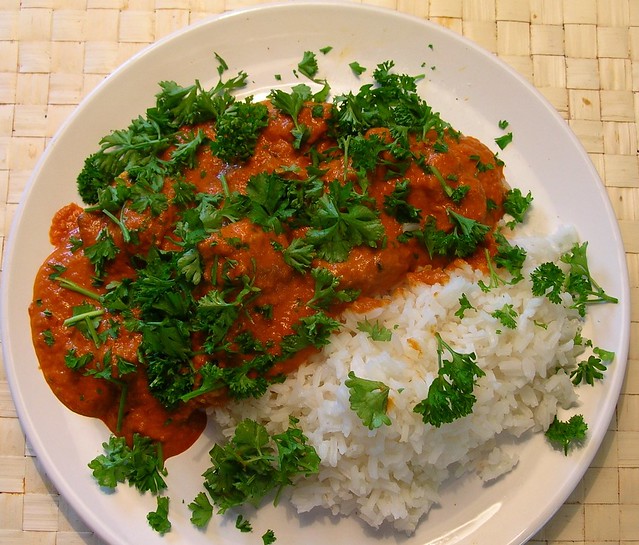 As a uniquely Western product, curry powder communicates exoticism by subtly shifting the flavour profile of a common ingredient from a given country’s culinary lexicon. Take Coronation Chicken, a curry-infused chicken salad Rosemary Hume created for the coronation of Queen Elizabeth II in 1953. While the dish has earned a reputation as an unwelcome lunchtime intruder, it epitomised worldly Britain when it was introduced. In The Constance Spry Cookbook, Spry remarks on Hume’s deft manipulation of curry powder to produce a sophisticated taste that wouldn’t alienate coronation attendees, ‘I doubt whether many … detected[curry powder] in a chicken dish which was distinguished mainly by a delicate and nutlike flavour in the sauce.’ Spry juxtaposes curry powder — and the curry it evokes —with ‘delicate’ and ‘nutlike’. Spry depicts curry powder without the creamy, sweet trappings of Englishness as strong and brash, qualities that are not to be associated with the young Queen.

Using curry powder to safely re-identify a familiar food as foreign is not solely an English phenomenon: German currywurst pours curry powder over cultural culinary touchstones such as sausage, chips, ketchup and mayonnaise, diversifying what it means to eat German. Invented in 1949 by Herta Heuwer and consumed almost exclusively as fast food takeaway, currywurst stands dot German cities. Like in Coronation Chicken, curry powder and sauce covers the protein; however, currywurst makes fewer gestures at exoticism, highlighting Germany’s traditional sausage. As currywurst remains noticeably German, karrysild — a popular smørrebrød topping of pickled herring in a creamy curry sauce — remains noticeably Danish. Unlike garam masala, which Indians use to complement a dish, Western cooks use curry powder to juxtapose their cuisine’s unmarked, normal, ingredients, permitting them to integrate the other into their cultural discourse while maintaining their culinary identities.

Certain commonalities arise among the use of curry powder in Coronation Chicken, currywurst and karrysild: the spice blend marks the dish, covers a protein, is mixed into a smooth sauce. The contrast between firm protein, smooth texture and curry spices emphasises the dishes’ non-native aspect. In English, German, and Danish cuisine, chicken, sausage, and pickled herring respectively appear in non-sauced versions. If curry is a Western catchall phrase for a sauce-based Indian dish, a creamy, stew-like texture is required to mark these curry powder flecked dishes as Indian-inspired. Whether chicken korma or chana masala, a curry combines a spicy sauce and a protein. Not only do Coronation Chicken, currywurst and karrysild use curry powder for an exotic experience, the dishes combine tastes, ingredients and textures in a similarly marked manner. 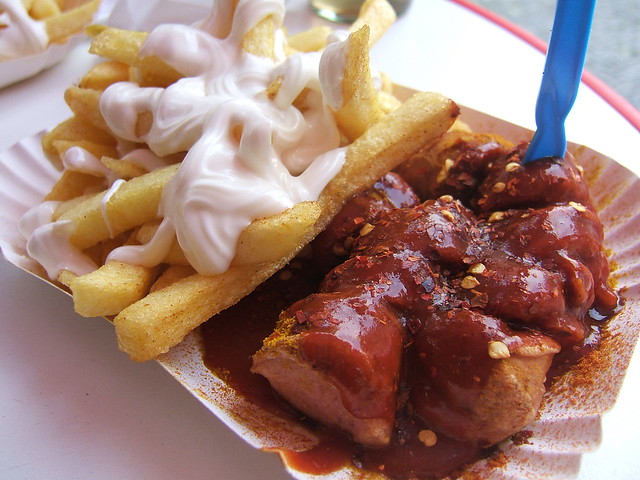 Curry powder mania isn’t limited to creamy preparations or Indian-influenced dishes. Cooks enjoy curried squash soup, Thai curry and Japanese curry, but these variances are not integrated into Western culinary vernacular to the extent of the canonical dishes cited above. When a recipe calls for curry paste or curry roux cubes, the country of origin must be specified: green curry paste is Thai green curry paste, curry roux cubes are Japanese curry roux cubes. Curry powder, on the other hand, implicitly connotes Indian food; a recipe doesn’t call for Indian curry powder, the Indian flavour is implied. Although other countries’ curry traditions — along with alternate uses for curry powder — are becoming increasingly common in Western gastronomic tradition, these preparations remain highly marked against Indian-influenced uses of curry powder.

Although curry powder may mark a dish as Indian, the exoticism is superficial, subtly altering the flavour of a familiar texture, condiment or ingredients. The generic blend of spices speaks more to the Western palate. Curry powder doesn’t only create a Westernized vindaloo, it creates explicitly European dishes. Whether Coronation Chicken, currywurst or karrysild, including curry powder in a creamy sauce covering a country’s preferred protein marks a known dish with a subtle, unintimidating, exoticism. With the expanding usage of curry spices in Western preparation and increasing influence of alternate curry traditions — such as Thai and Japanese curries — it is possible that curry powder’s reputation will shift. Instead of being a shortcut for highly marked flavour, curry powder may transform itself, becoming an ingredient that brings back memories of cleaned-up versions of foreign culinary traditions. Curry powder may demonstrate the West’s attempt to dominate the Other, but as the spice blend integrates in Western cuisines, it becomes less exotic, shifting the dynamic between known and other from domination to coexistence.

[1] There is much discussion over the translation of the word ‘curry’. For more information on its Indian equivalent see here, here and here. It seems evident that the word is an English creole as opposed to a true Indian term.