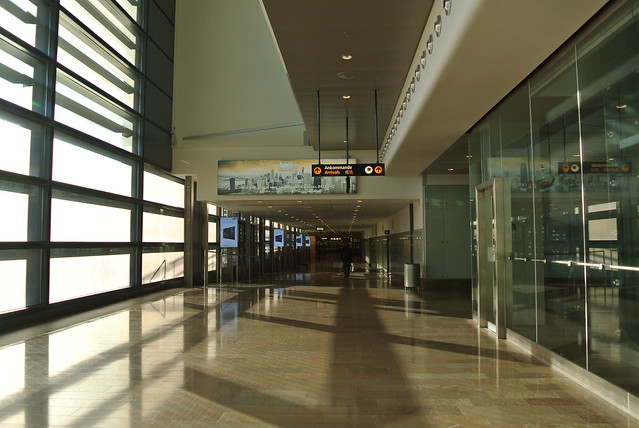 The other day I was in a government building and asked a guard where I could find the bathroom. ‘On the twelfth floor,’ she grunted. Then she disappeared, turning on her rubber heel, keys clanking. Right, to the twelfth floor.

The twelfth floor signalled my entrance into a heterotopia of first world bureaucracy. Michel Foucault, the 20th century French intellectual, describes a heterotopia as an enacted utopia that expresses a vision of a societal ideal. A secular higher power directs meaning within these spaces. The power may be cultural or political or social as long as it illustrates the operation of a group. Some may enter the area while others are prohibited. These spaces reveal how we structure our world and respond to taboos. They possess both intellectual and practical functions. As I examined the limbo-esque twelfth floor, I better understood my community.

In addition to public rest rooms — so-called public, I had to show an appointment confirmation and passport to pass security and access them — the twelfth floor boasted a café (aptly named Café on Twelve) and empty locked rooms. I saw a man on his phone and a woman waiting for the elevator. The emptiness evoked the distance the building put between its functions and visitors. Although the visitors had been chosen to enter, they were shielded from the bureaucracy’s inner workings. Shades of pale and mossy green covered the walls like an alien’s living room. After seeing this sinister hue, the tenth floor’s plastic pink felt like the cheery. Whereas the public amenities floor intimidated me with closed doors and strange colours, the tenth floor distracted me with a bright, false cheer. Openness and restriction characterise government bureaucracy.

Foucault argues that access to space and spatial relations dictate modern life. The sites we visit define us. Frequenting a museum or being admitted to a hospital gives us a distinct social identity through which to perpetuate culture as reflected in a given area. Government buildings accomplish a similar function. Entering one of these guarded edifices associates the individual with a specific ideology, defines them according to the law and asserts their role as an ordinary citizen. The government building is a heterotopia in that it mirrors society and social relations while existing separately from the daily orbit of most citizens.

Myriad citizenship identities were being formed and performed during my visit. There were the deviants; arguing with the guards over phones and restrictions. Others acted as enforcers, upholding social norms. Some played the atemporal: they were waiting when you arrived and waiting when you left, casting them in a separate orbit from the standard 30-minute appointment. Our purposes impacted our roles. Some sought citizenship, others green cards renewals and others foreign visas. Although the heterotopia echoed the country in which we lived, our respective sections of the mirror corresponded with our social identity.

Time impacted the social and governmental interpretation of my national identity. Defining my identity as ‘deviant’ as opposed to ‘in crisis’ was a product of the 21st century’s loosened borders. Whereas immigrants to the US during the early 20th century were processed en masse on an island, modern migrants are processed in varying degrees of public view. Migration is no longer solely the product of a crisis — of money, of religion, of food, of family — that brings migrants to a new space. While contemporary migrants may be undergoing crises, the motivations are varied. I was a deviant: I was deviating from the path my country had set for me and, accordingly, entered into spaces that delicately pushed me away from others. They pushed me toward the desolate twelfth floor.

Crossing the threshold of the heterotopia ushered me into alternate temporal realms. My time within the building was sectioned: there was my appointment time; the queues, waiting for my number to be called; and my brief appointment. Time’s regimentation within the heterotopia foreshadowed the new demarcations I’d experience upon leaving: there would be the time to send my application; the window of time during which I could enter the country; the days when I’d be permitted to pick up a residence permit; the years for which I’d be allowed to stay within the country; the hours I’d be permitted to work; the day on which I’d be required to leave. My new experience of time within the heterotopia anticipated how I’d experience shared cultural time upon leaving.

But even as this heterotopia acted upon us visitors, it also acted with us. This was how I arrived at the twelfth floor. Although the building could have been closed in a fortress of hidden governmental rules, society’s insistence on viewing itself as a democracy required it to be at least partially open. So I had the terrace café and a toilet amidst an alien-green hallway of closed doors. My heterotopia of bureaucracy asserted that my society was open, even as it partitioned my time, directed my identity and determined my movement.