For a fresh metaphor on coffee, I add cardamom and cloves to my brew. The spices’ impact is obvious from the moment the hot water hits the beans. Vegetal and sweet and floral: I drink my coffee newly alert.

I first tasted spiced coffee at a stand at Smorgasburg, Brooklyn’s food flea market. The operator — Bunna Café an Ethiopian restaurant in Bushwick — promised Ethiopian coffee made authentically with cardamom and cloves. I sipped timidly. But soon I was slurping at the drops between the melting ice cubes. The coffee was barely sweet, simultaneously light and rich. Bunna’s twist on my favourite summer coffee reinvigorated my reaction to iced coffee.

That’s what Bunna wants. The restaurant frequently holds coffee ceremonies to acquaint customers with the Ethiopian mindset. Coffee is crucial to Ethiopians. It is a key export, daily ritual and cultural touchstone. The coffee ceremony welcomes guests, fueling conversation as the beans — toasted immediately before serving — are subject to three rounds of brewing. From plastic cups of iced coffee to cultural events, Bunna presents Ethiopian culture as a fresh metaphor on coffee.

But adding cardamom to coffee isn’t a new habit, nor is it uniquely Ethiopian. Cardamom-growing countries — from Thailand to North Africa — infuse it into their coffee to refresh their brew. But the spice’s high price tag reserves these preparations for unique occasions and special drinks. Sometimes entire pods are ground along with the beans, other times they are left whole and chewed as a breath freshener while sipping. The resulting coffee may be drunk black, with sugar or condensed milk. Since a single pod will transform a pot of coffee, the brewer may share their wealth without being ostentatious. Like the coffee ceremony elevates the daily rite of coffee drinking, including a new spice in a cup retrains the taste buds, forcing a re-examination of the daily ritual of coffee drinking.

If you have coffee and cardamom, you too can celebrate. Choose your coffee — Ethiopia, as the birthplace of coffee, has more indigenous varietals than other coffee growing regions.[1] Just before you dump the warm water over those grounds, add the spices. You need less than you think. Then brew. And smell: slightly musty, floral, and warm. Drink. It’s coffee, but there’s something else. There’s a fresh metaphor. 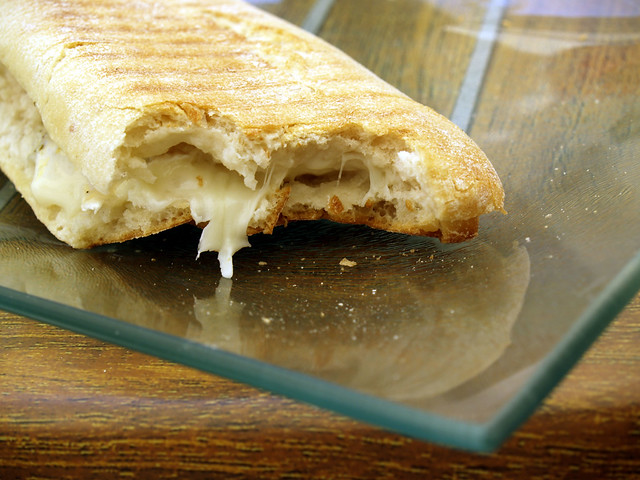 Like many American kids I enjoyed grilled cheese growing up, but unlike most I didn’t crave it until I discovered grilled mozzarella. That I had to discover it belies its simplicity. Cut a hunk of crusty bread in half, a non-assertive loaf is best (don’t use sourdough). Tuck in some thinly sliced mozzarella and dab on olive oil before tossing the sandwich on a hot griddle. Smoosh the sandwich under your heavy cast iron pot. Watch the cheese overflow — those crusty bits provide crucial textural contrast. Take a bite: milky mozzarella accentuates sweet bread, which grassy olive oil cuts. Heat transforms common ingredients. With only a few steps, you could cook one now. Don’t. You’ll be disappointed in the result because enjoying grilled mozzarella requires planning, thought and skill.

Grilled mozzarella exerts a pull that cold sandwiches lack because its tastes and textures demonstrate cooking’s alchemy. Yet citing the Maillard reaction — when sugars caramelize and proteins denature — is misleading. While the tongue tastes the product of the chemical process, experiencing the processes tempt the palate. You remember not only the flavour, but also how the melting cheese yields, separating into strands; how the crusty bread flakes; how the oil-toasted sandwich leaves the hands barely greasy. Cooking heightens the sandwich’s tactile pleasure.

Make your sandwich next Saturday. Pick up bread at the farmer’s market or your favourite bakery (no sourdough!). Buy the freshest mozzarella. Get more olive oil during your weekly grocery shop. During your routine-free lunch, marvel at the meal culture, heat and skill produce. Culture, skill, heat. Mozzarella, bread, olive oil. A fresh taste of a familiar triad. 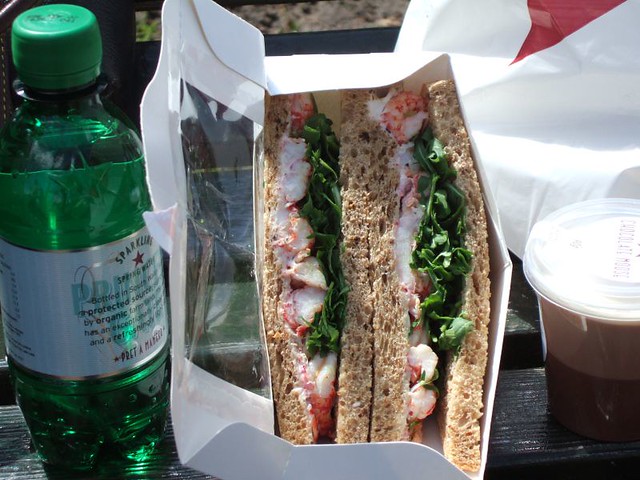 Chewy, crunchy, creamy: the rocket and crayfish sandwich mixes divergent tastes and textures better than any other bread-based meal. With squishy whole grain bread, toothsome crayfish, crunchy rocket and just a hint of creamy mayonnaise, the sandwich is an archetype of less-is-more simplicity. There’s a reason that this combo has become a classic grab-and-go lunch in England and abroad.

But, lo, the pitfalls! Add too much mayo and the sandwich disintegrates in your hands. Throw in so-called fun spices and you lunch on a wannabe crab cake. Too much rocket, too many crayfish: the sandwich falls apart.

Here’s how we’ll do it: grab your bread, ideally a whole grain with plenty of give. This isn’t the moment for your toothsome, crackly country loaf. Take a moderate amount of mayo, a teaspoon will suffice, and spread it evenly over the slices. Gently chop your rocket, layer it on one side and scatter the crayfish over the other. Close it up, cut it in an attractive diagonal half. Eat. Done. 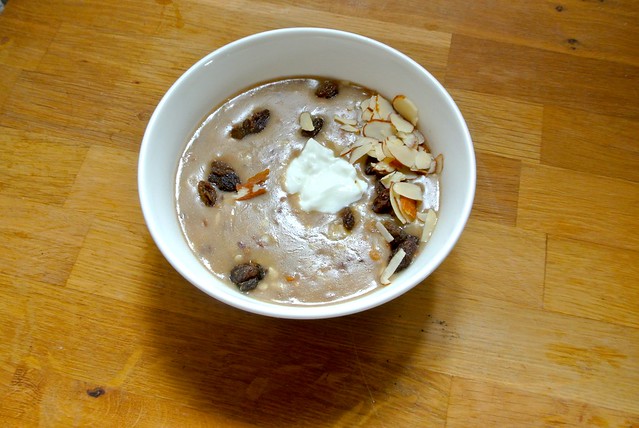 Soaked scraps of dried rye bread boiled to mush. Smooth, sour porridge topped with thick skyr or frothy æggesnaps (creamed egg yolks). Meet øllebrød: meaning ‘beer bread’ in Danish, a more accurate translation would be ‘weirdly delicious porridge’. This is oatmeal, lost to the dark Danish winter. This is food, not an art piece designed to garner social media likes. But don’t fault øllebrød for its humble appearance. After one spoonful, you’ll realise anyone can succumb to øllebrød’s spell of nostalgia, Scandinavian heritage not required.

Øllebrød, pronounced ooh-le-brooht, was a staple dish for Medieval Danes, though nowadays kids are more likely to eat it for breakfast on chilly winter mornings. The meal’s origins remain shrouded in mystery. Some believe monks invented the dish, dipping old rye bread into beer to soften the dried out scraps. The next morning, they’d heat up the crumb filled liquid and savour the resulting porridge for breakfast. Others trace øllebrød to the peasant home. Bread husks were dropped into a bubbling pot, warm beer added and the whole thing simmered. People would serve themselves periodically throughout the day when hunger stuck. Regardless of its origins, rye bread porridge has been mythologized in Danish culture and now serves as a routine reminder of the individual’s place in the nation’s history and culture.

Despite the dish’s unknown birthplace, the recipe has ostensibly withstood change. To prepare, you boil some stale rugbrød — dense Danish rye bread — and add beer — usually hvidtøl, a low alcohol brew (many modern versions omit this). Then, cook the mixture until it forms in a spoonable, mushy paste. Today’s palates might enjoy topping it with a dusting of sugar or a luxurious dollop of something cold and creamy. While øllebrød is unique to Denmark, other Northern countries serve up similar rye based dishes. Finns enjoy mämmi, a dessert sweetened with sorghum and flavoured with orange rind. Mämmi is most commonly served at Easter, while øllebrød is eaten for breakfast throughout the year. Given its cultural specificity, øllebrød serves as a way for Danes to assert their storied cultural identity on a daily basis. 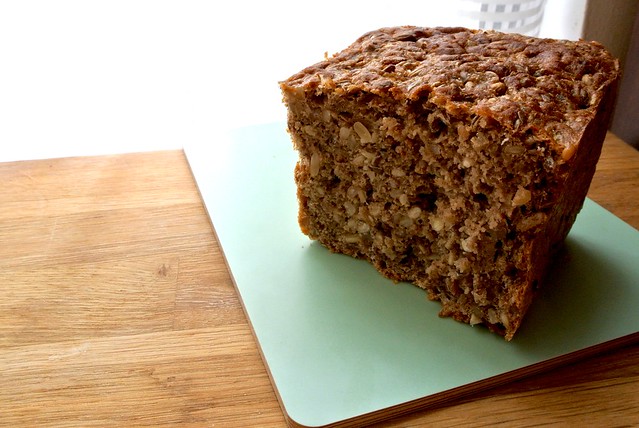 As Korean parents induct toddlers into the world of kimchi, Danish adults usher children through the cultural rite of rye bread porridge. And, like marmite divides the British public, rye bread porridge cleaves Danish opinions: you love it or you hate it. Memories help Danes acquire a taste for øllebrød. Danish bloggers recall eating a steaming bowl as a special wintertime treat when visiting grandparents or as an indulgent breakfast to steel them against the cold. With the assertive tang of sourdough rye, liking øllebrød is easier for those reared with an appreciation for strong, sour flavours.[1]

The breakfast has endured rollercoaster fortunes: popular in the Middle Ages through to the early twentieth-century, forgotten for most of the twentieth century, and newly popular in the twenty-first. A focus on rye’s health benefits and Scandinavia’s rise as an epicentre of cool have pushed this stick-to-your-ribs breakfast into the spotlight in Denmark and beyond. Øllebrød is everywhere. It is on Pinterest. It is on Instagram. Craving øllebrød but don’t have any rye bread? Try instant porridge flakes, available at your local Irma supermarket! From Copenhagen to New York, the porridge graces restaurant menus, appearing as an ice cream-laden dessert at New York’s Acme and as a hip breakfast at Copenhagen’s Grød. Bloggers embrace the porridge, citing the foodie film Babette’s Feast in which some Danish girls teach French Babette to prepare øllebrød. What was once a Danish taste has now gone global: Nordic-philes around the world masquerade as Danish children as they revel in the rustic joy of eating mushy boiled bread.

Ready to eat? Good. Here’s a simplified version — sans beer — that cooks up quickly in the morning. This isn’t your super authentic recipe. This is your adapted, non-Danish kitchen recipe (want the real deal? Try this recipe and this one). My version was tested using both Finnish-style Ruis bread —softer than rugbrød and unseeded — and a Danish-style rye bread from Bread’s Bakery in New York. Enjoy!

Crumble rye bread in a pot and cover with water. Bring to a boil, stirring occasionally. Once boiling, reduce to a steady simmer and cook for approximately ten to fifteen minutes. Stir intermittently. When the bread has completely broken down, it can be taken off the heat. Cook until it reaches the consistency you’d like (somewhere between runny and oatmeal-dense is a good start).

My deep relationship with butternut squash soup sprung up after an emergency grocery shop. Returning to university and an empty refrigerator after the Christmas holidays, I despaired at finding dinner amidst Sainsbury’s uninspiring rows of broccoli, microwave pizza and oven chips. I walked past the chilled soup section, which held yadda yadda yadda and butternut squash soup. The tall, oval container with its semi-firm but slightly pliable plastic held a pale orange liquid that looked okay. So I bought it and went home to my stove. After a few brief boil, a yawn or seven and a frantic search for a spoon, I had a steaming bowl of soup in front of me and had a new tradition in my jet-lag alleviation routine.

Thanks to its myriad variations — all of which lend themselves to contented sipping — discovering butternut squash soup ushers you into a boundless world of recipe clipping and soup seeking. Simmered for hours, roasted beforehand, sautéed with onions: butternut squash soup makes friends with any flavour you throw at it. Unfortunately, too many magazines and soup-making companies erroneously believe that butternut squash soup smacks solely of creamy sweetness, hold the savoury vegetal. I disagree. Combing oodles of warming cinnamon, luxuriously rich vanilla, and thick cream with silky puréed squash conjures up tastes of redundantly decadent Thanksgiving desserts. But rummage through the pre-packaged boxes and Internet recipes and you’ll find versions that don’t masquerade as pudding. Coupled with Mexican spices, coconut milk and sherry, these squash soups compel you to slurp your way to the bottom of the bowl.

Butternut squash soup seems an effortless meal, but the diverse recipes and their myriad pitfalls reveal otherwise. In its apparent simplicity butternut squash soup hides a complex web of infinite variations. This keeps us coming back. We return to the dish day after day and year after year, because squash effortlessly incorporates these new inflections while remaining familiar. Following that recipe in this year we may add roasted peppers or sour cream, but we revel in the joy we experienced last year when our soup was infused with nutmeg. The accent develops, but the dish remains recognizable. We change, but we continue to be ourselves.